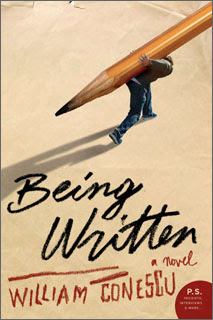 Up-and-coming North Carolina author William Conescu will celebrate the release of his first book, Being Written, on September 9. He was the first graduate of N.C. State University's new creative writing M.F.A. program and has been published in several literary journals, including The Gettysburg Review, New Letters, and Green Mountains Review.

We were in some of the same writing workshops at N.C. State, and I caught up with him the other day to ask him about his new novel.

What was the process for getting your novel published?

As you know from our grad school days together, I wrote Being Written as the largest part of my creative writing thesis. Because it was on the short side, I thought I’d market it as the anchor novella in a novella/short story collection. After graduating, I set it aside for about a year and wrote a few more stories, and then I showed the whole package to an agent who specializes in literary fiction. Bill Clegg is a terrific reader and a great agent. He urged me to think of Being Written as a novel and worked with me as I revised and expanded it a bit. By March 2007, we were ready to send the novel out to publishers, and it was sold to Harper Perennial within about two weeks. [...]

In Being Written, you tell the story of a man who knows that he is a minor character in a book (sort of like the movie, Stranger than Fiction, although you had written your idea way before the movie!). How did you get the idea for your novel?

I started out wanting to write a playful work of metafiction about a guy who knows he’s in a novel, but who’s the literary equivalent of a movie extra. His greatest purpose in the universe is to fill out crowd scenes. That idea tied in nicely with another story I’d been wanting to write, one about artistically-minded people in their twenties and thirties trying to figure out how best to live their lives. So these stories collide in Being Written. Daniel, the fellow who’s only been a minor character thus far in his life, works his way into the life of a singer and her “artsy” social circle and goes to some lengths to make himself a vital part of their story. I wrote Daniel’s sections in the second person, which was a lot of fun, so Being Written alternates between third person chapters of “the book” that’s being written and second person chapters that show Daniel’s perception of being written into it.

Growing up in New Orleans and later living in NC, do you consider yourself a "Southern" writer? How do you think living in the South has influenced your writing?

I don’t think someone reading my work would necessarily identify me as a Southern writer, but as you said, I’ve spent most of my life in New Orleans and North Carolina – two places with rich literary traditions. As a writer, I’ve certainly been shaped by these communities, and I’ve benefited from exceptional teachers, first in New Orleans, and then at UNC and NC State.

What are you reading right now?

What is your "guilty pleasure" reading?

I love the comedienne Chelsea Handler, and I’m about to start reading Are You There Vodka? It’s Me, Chelsea.

What advice would you give to writers who’re considering whether or not to attend an M.F.A. program in creative writing?

I’m someone who really values the creative writing workshop. I value the constructive feedback, I’m motivated by the deadlines, and I think we become better critics of our own writing when we critique and discuss other writers’ works-in-progress. If you value these things, then go for it. In the meantime, you might see if your local university or community college offers a creative writing workshop for continuing education students.

What are you working on now?

I’m hard at work on another novel. I’m not ready to talk about it yet (I haven’t made it to the end yet, so I only think I know what happens!), but it’s going well. I’m excited about it.

Note: If you're interested in checking out William's book before September, you can pre-order it at various websites, such as Amazon.com, Powells.com, etc...

Posted by Louisa at 8:01 AM No comments: