Looking for some great Halloween films? Check out the Southern Appalachian Film Festival, beginning tomorrow (Oct. 31) and running through Nov. 4. held on the four campuses of Pellissippi State Community College in Tennessee. My favorite film description?

"A locally-themed documentary, 'Hollywood to Dollywood,' tells the story of twin brothers Gary and Larry Lane, who journey to Pigeon Forge from Dolly Parton's star on the Hollywood Walk of Fame, in a camper they name 'Jolene,' to hand-deliver a movie script to Parton."

Posted by Louisa at 7:40 AM No comments:

In memory of Nicky 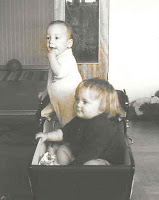 I'm no poet, so apologies to all poets and poetry lovers out there! But I wanted to record a few words in memory of my cousin, Nicky, who died earlier this month. We used to hang out as kids (I'm the chubby blond one in the photo). If you've lost a loved one and want to post a short poem, let me know.

“Bouncing Down the Heather”


Brown eyes and dark hair,
a mischievous grin
and contagious laugh
brought out the adventurous side in me.
Stories of “all-nighters” with his friends at the park,
rave music,
tricks on his BMX.
We’d sneak Granny’s biscuits out of the kitchen and up the stairs
to the Big Room.
One night, we crept outside and rolled a car in Arthur Street.
We shared slingshots
and walked 7 miles to Save the Whales.
He was cheeky,
never boring,
a spark always burning.
Energy,
laughter, and joy.
Always trying.
He reminded me of Granddad,
bouncing down the heather.

Just figured out how to create coupons on www.smashwords.com. If you'd like 50% off my mini-collection of short stories, Rocky Road, just enter the code KN56A during checkout. Aren't coupons great! "Sale" ends November 1.
Posted by Louisa at 4:46 PM No comments:

Article in Our State mag.

Please check out my article in the October issue of Our State magazine. It's about Carrboro, NC, writer Daphne Athas. She taught at UNC-Chapel Hill for 41 years and just recently published a kind of historical memoir, Chapel Hill In Plain Sight by Eno Publishers.
Posted by Louisa at 2:37 PM No comments:

Don't have  anything substantial to report on just yet... Just got back from Scotland on a family trip. Had hoped to visit The Writers' Museum in Edinburgh, but there just wasn't time. Also wanted to make it to Scotland Street, where reportedly Ian Rankin, J.K. Rowling, and Alexander McCall Smith live. But found out that they actually live in the Merchiston area in the southwest part of Edinburgh, which would have been harder to get to, anyway!
Posted by Louisa at 7:37 AM No comments: