Author and book reviewer Alle Wells has a great roundup of her new Southern favorites! Check out her guest column, "Romancing the South," on Bette Lee Crosby's website.
Posted by Louisa at 7:35 AM No comments:

Mixing writing and music -- the way of the future?

If you happen to be near Dalton, Georgia, this Thursday (August 9th), be sure to stop by Chelsea's on Thornton at 5 pm to hear author Kimberly Brock, who wrote The River Witch, and musical act Grits & Soul for a special collaboration connecting Southern fiction and music.

I think it's a great idea to combine music and reading -- both books and songs tell stories, and both capture an audience and transport them to another place. Despite this fact, I've only come across a few authors who've taken advantage of a musical connection to help promote their work. 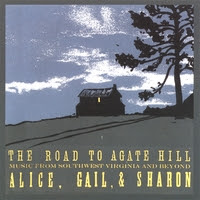 North Carolina author Lee Smith was working on her historical novel On Agate Hill, when friend and songwriter Alice Gerrard asked her to write the liner notes for a new CD she was working on. Gerrard's song "Agate Hill" so inspired Smith that the two teamed up for readings -- Smith read, and Gerrard and friends accompanied with music. The readings, in turn, inspired Gerrard's CD, The Road To Agate Hill. Listen to an interview with Lee on The State of Things.

Another NC author, Clyde Edgerton, often combines his love of music and writing. Several years ago, I went to hear him read from Lunch at the Piccadilly, where he played his guitar and sang funny songs that complemented the book. It was a great experience, the audience loved it, and the place was packed! Now, there's even a musical comedy inspired by his book called Lunch at the  Piccadilly, composed by Mike Craver and directed by Steve Umberger.

Songs, CDs, plays... What a great way to build a diverse reading audience! If you know of any other writer-music duos, please let share in the comments section!
Posted by Louisa at 6:48 AM 2 comments: