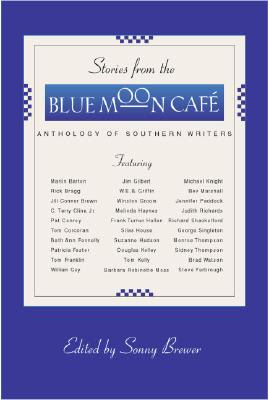 My friend recently let me borrow Stories from the Blue Moon Cafe, a great anthology of short stories, essays, and poetry from writers all over the South. It's not new--it was published in 2002 as the result of a literary gathering called Southern Writers Reading in Fairhope, Alabama. Apparently, there's a whole series of them now.

Some of the writers in this first volume include: Rick Bragg, C. Terry Cline Jr., Patricia Foster, William Gay, Pat Controy, Silas House, and lots more. An especially humorous one is "S. Trident" by C. Terry Cline Jr, about the purchase of some old Cold War government property, told entirely in letters to and from the U.S. and Russian government.
Posted by Louisa at 5:56 AM No comments:

Let's hope it's a trend...a new independent bookstore opened in November in Hillsborough, NC. Purple Crow Books is a tiny nook that specializes in Hillsborough and NC authors. There's a cute little kids' room with great selections and a special "seat" made out of a claw-foot tub!

If you've heard of any new indie bookstores in the South, please let us know!
Posted by Louisa at 6:35 AM No comments: